LEE O'BRIEN - "THIS IS ME" (Recorded with

Taken under the wing of Status Quo legend Francis Rossi, this album contains twelve all-original compositions, with four of the titles being co-written by Francis. Lee provides lead vocals, guitar and drums, while Rossi contributes lead and bass guitars, keyboards, and backing vocals throughout.

The whole album was produced by Francis Rossi in his home studio, and recorded by Status Quo engineer Andy Brook. With Lee's own initial pressing of the album sold out, Barrel And Squidger Records are proud to present our newly-expanded version with brand new packaging, on tri-fold digipak CD and two different colours of ULTRA-limited cassette, containing a further exclusive Francis Rossi co-composition recorded with Francis in April 2022.

"Status Quo's Francis Rossi gave singer-songwriter Lee O'Brien a helping hand, co-writing a few songs with him and producing this debut album. When it comes to words O'Brien is on another level... An appeal that will resonate with more than just Quo fans. 7/10" - Classic Rock magazine 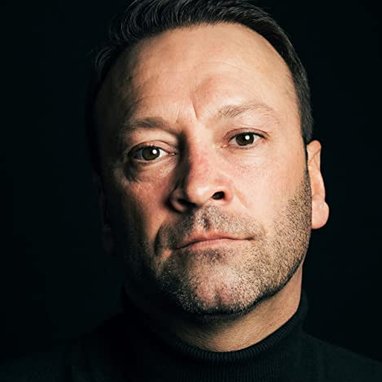 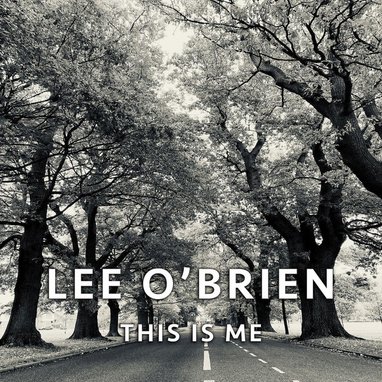 John Coghlan, Status Quo founder member and drummer of the classic "Frantic Four" line-up, is a true British rock legend. He has tens of millions of record sales to his name and made countless Top Of The Pops appearances, with 23 hit singles (14 in the UK Top 10) and 26 hit albums (15 in the UK Top 10) - four of which went all the way to the Number One spot!

It's a first physical release for "Lockdown" - the thundering, rifftastic monster hit that has notched up over 150,000 video views to date. It's paired with "No Return", the brand new driving single once again recalling the authentic, no-nonsense rocking sound of mid-70s Quo. Uniquely, BOTH tracks separately topped Classic Rock magazine's "Tracks Of The Week" poll! 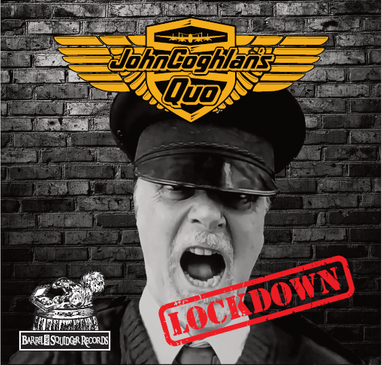 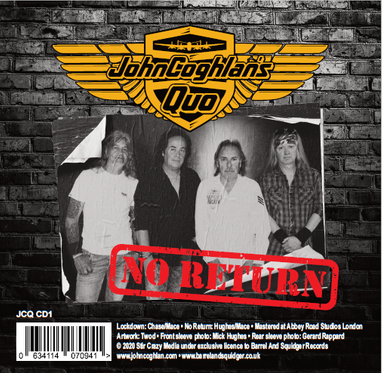 He opened Live Aid, has sold countless tens of millions of records, appeared on Top Of The Pops dozens of times, and has had around 30 hit singles and 30 hit albums, two thirds of which went Top 10, with five reaching Number One. That's just his UK track record!

Departing from Quo after Live Aid, Lancaster joined Australian supergroup The Party Boys and enjoyed a further Number One single with "He's Gonna Step On You Again", a cover of the John Kongos classic later reimagined by Happy Mondays as "Step On". Forming The Bombers shortly afterwards with Party Boys bandmate John Brewster (of Australian rock pioneers The Angels, cited as a major influence by Guns N' Roses, Nirvana and Pearl Jam), an early incarnation reunited Lancaster with former Quo drummer John Coghlan, bringing the original 'Frantic Four' rhythm section back together for the first time in nearly a decade.

Alan Lancaster's Bombers – "Live!" dates from that short-lived period in 1989 and was recorded in Sydney, Australia. Professionally captured, the tapes lay untouched for decades until recently rediscovered by Lancaster. Now with post-production and mastering by former Quo studio engineer and producer John Eden, this stunning recording is presented for the first time by Barrel And Squidger Records.

The album was launched in the presence of Lancaster and Coghlan themselves at the 2019 Official Status Quo Fan Club Convention, prior to a general mail-order release. The first pressing - just 100 copies each of red, white or blue vinyl - sold out in seconds, closely followed by the CD. Now available on LP vinyl picture disc, in a strictly limited edition of just 300 copies. 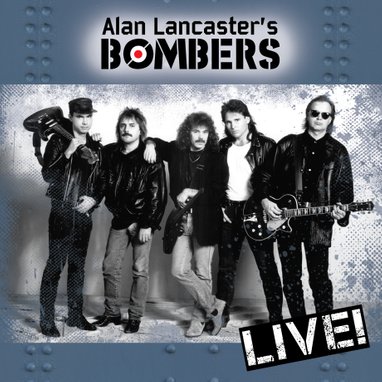 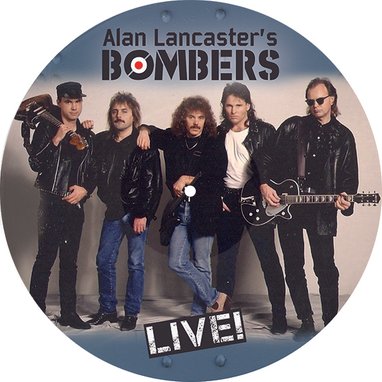 Having supported Status Quo on numerous occasions, Walkway were due to collaborate with Rick Parfitt on "Over And Out", the solo album he was working on before his untimely death. Here they team up with legendary original Quo “Frantic Four” drummer John Coghlan on a cover of Parfitt’s Quo classic “Rain”. His appearance here marks multi-million-selling Coghlan’s first UK single release in over thirty years.

Massive Wagons – “Back To The Stack” :

Currently leading the UK's "New Wave Of Classic Rock" movement, massive Quo fans Massive Wagons have contributed their self-penned Parfitt tribute track “Back To The Stack”, which received rave reviews upon its original digital-only release earlier in 2017 in aid of the Teenage Cancer Trust. Since donating their track to this EP, Massive Wagons signed a worldwide recording deal with Earache, launching them into the premier league with UK hit albums "Full Nelson" (#16) and "House Of Noise" (#9) - thus granting this EP official "Before They Were Famous" status and guaranteeing its future collectability!

All profits from the sale of this EP go to children’s cancer charity The Shona Smile Foundation (1110177). 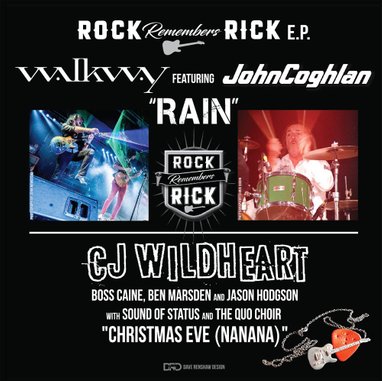 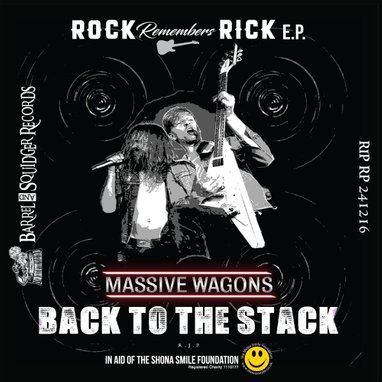 Hailing from the Dalsland and Värmland regions of Sweden, Sound Of Status are one of the world's leading tributes to 'Frantic Four'-era Status Quo but, unusually, also boast a fine line in their own brand of self-penned, heads down classic rock, heavily influenced by the likes of Quo, AC/DC and Airbourne. "Rough Business" contains ten all-original gems showcasing their undoubted New Wave Of Classic Rock credentials.

This is a strictly limited edition release of just 300 individually numbered LPs in total pressed in Sweden colours - 150 copies on blue vinyl, 150 copies on yellow vinyl.

The inner sleeve has an amazing montage of live photos mostly taken at the band's explosive, career-defining appearance at 2017's Official Status Quo Fan Club Convention held at Butlins, Minehead, UK. During this event they also contributed to "Christmas Eve (Nanana)", a charitable tribute to the late Rick Parfitt fronted by CJ of Brit Rock legends The Wildhearts. The track appeared on the "Rock Remembers Rick EP" alongside cuts by Massive Wagons and Walkway featuring original Quo drummer John Coghlan, and peaked at #2 on the Official UK Physical Singles Chart in December 2017 before re-entering the chart on two more occasions. 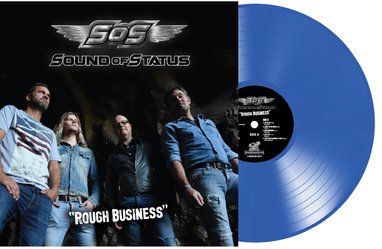 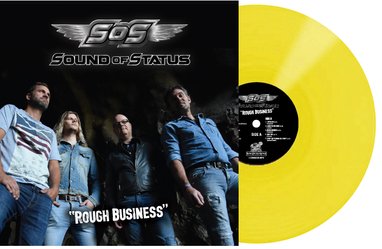 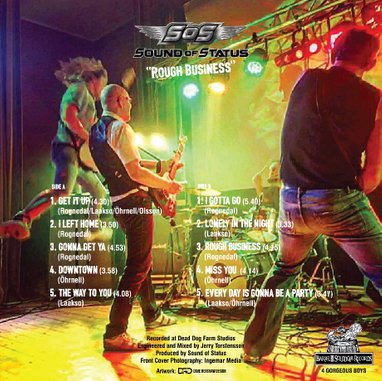 BOSS CAINE - "THE SHIP THAT SAILED"

Having notched up literally thousands of gigs of all sizes all over the UK, including support slots with legends of all genres such as Tony Joe White, Arlo Guthrie, The Undertones, Alabama 3, Richard Hawley, Guillemots, Shed Seven, The Wildhearts, and many, many more, toured with UK folk icon Beans On Toast, and American country hero Shooter (son of Waylon) Jennings, the good ship Boss Caine sails on.

Available in double 180g gatefold "Black Night" vinyl (200 copies only), or "Moon White" vinyl with bonus 12-track duplicated CD (in a glossy slipcase) "The Ship That Didn't Sail - Demos And Outtakes" (300 only). 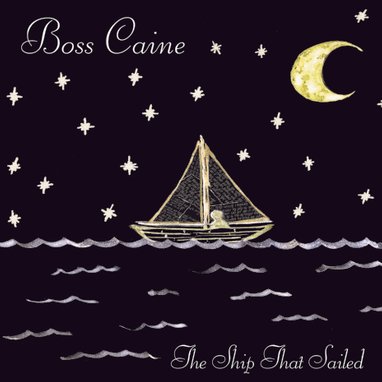 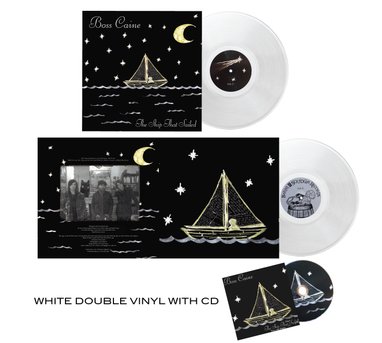 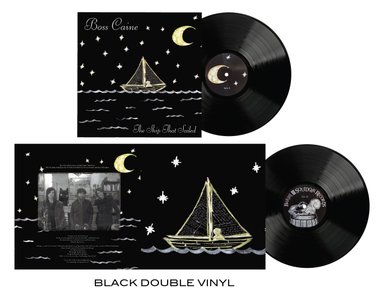 THE TALLYWAGS - "CHARGE OF THE LIGHT BRIGADE" 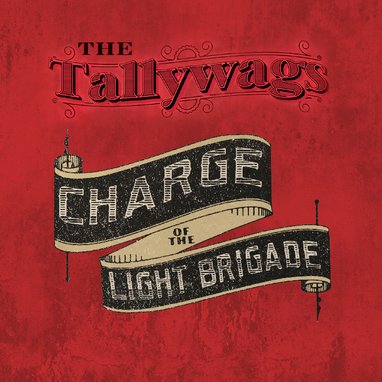 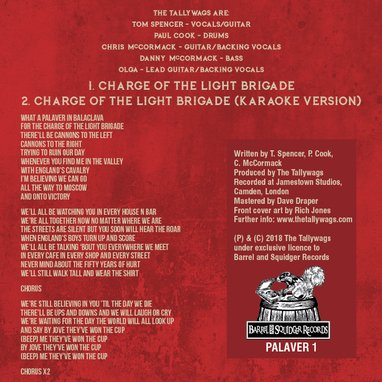 Digital singles - "Watching Me" and "Futurebright".

This outfit are new in this form though the members have been around the scene for years in various bands including a Britpop group called Twist. Even earlier than that, there's an appearance on BBC1's Going Live (ask your Dad) and lots of major label work with some of the biggest names in music.

In this incarnation though they're imbued with the spirit of Tarantino, teaming up with legendary producer & engineer George Shilling to create wonderfully evocative outlaw country / spaghetti western vibes. Here at Squidger Towers we love them, and we're sure you will too. 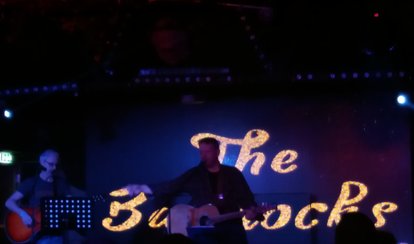 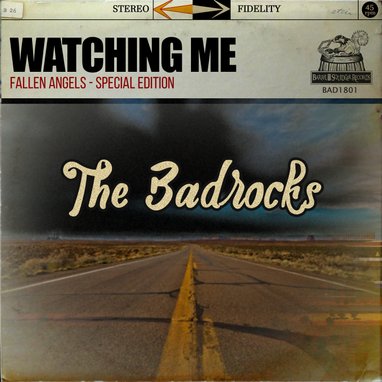 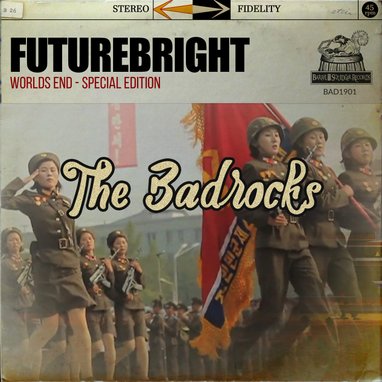